Today I’ve been developing a concept to turn the frontpage news block into something that resembles a CMS news block (WordPress-esque).
It’s basically a clone of the Latest News Block but uses image thumbnails, removes some clutter and formats nicely.
It’s designed to go in the centre block of a Moodle theme (if the theme supports it), but works in a narrow 220px left or right column too.

The image is just a file attachment in the course forum, and the script looks for an image called “feature.jpg”.  So as long as user attaches an image of that name it displays a thumbnail of that image.

I need to refine the code and make it place a default image if the user forgets to add a file, or make it a required field.  It would be nice to add a sticky option too to stop posts from sliding down the list, but it’s a good start to making Moodle behave more like a CMS.

When I’m happy with the code I’ll release it. 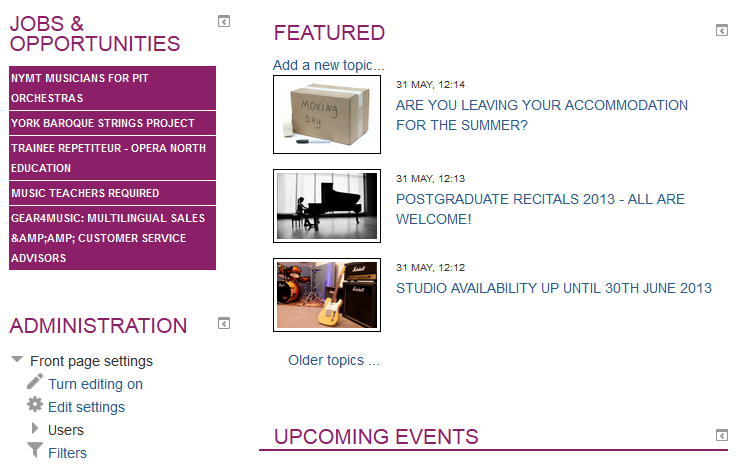 Having just implemented student timetables and student attendance registers into Moodle I required space on the MyMoodle page for links to these two new pages.
The most logical place for this was in a block and the “Logged in User” block was the perfect place to embed these links (and future links if required).

In order to keep everything core I decided against hacking this block directly and instead cloned the block and hacked this one instead.  I’ve cleaned it up and added some extra CSS elements and the final result is shown below.

Now when I upgrade Moodle nothing gets overridden as this is now a separate block.  I also have a block now with wich I can add extra functionality should the need arise. 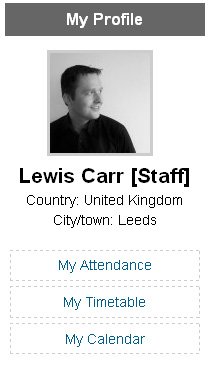 My Profile Block for Moodle 2